Lunch on the Road in Australia

When out on the road and looking for a quick lunch, what are some common choices that Australians make? Well, apart from food like McDonald’s, which is in most countries, some popular choices are Pies, Pasties, Kebabs and Burgers. 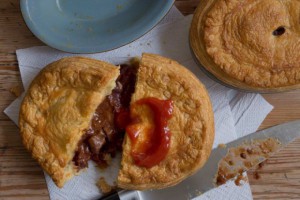 Meat Pies
An Australian meat pie is a hand-sized pie containing diced or minced meat and gravy, sometimes with onion, mushrooms, or cheese and often eaten as a takeaway food snack. They are usually eaten with tomato sauce (very similar to American ketchup) and are considered to be an Australian icon. The meat pie is heavily associated with Australian rules football and rugby league as one of the most popular consumed food items whilst watching a game. The Victorian pie brand Four’n Twenty produces 50,000 pies per hour! In truth, meat pies are just as much part of New Zealand’s culture. 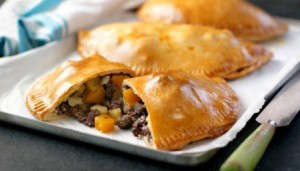 Pasties
A Pastie, or Pasty (UK spelling) is a baked pastry thought to be originally from Cornwall and Devon, United Kingdom. They made by placing an uncooked filling, typically meat and vegetables, on one half of a flat shortcrust pastry circle, folding the pastry in half to wrap the filling in a semicircle and crimping the curved edge to form a seal before baking.
The pastie is now popular worldwide due to the spread of Cornish miners and sailors from across Devon and Cornwall, and variations can be found in Australia, the United States, Argentina, Mexico, Ulster and elsewhere.
There is a famous annual pastie festival on the Yorke Peninsula in Australia which started in 1973 and is said to be the largest is the world. 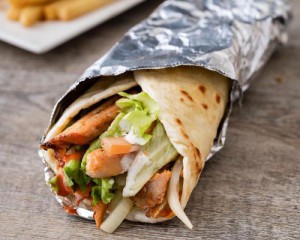 Kebabs
The name ‘kebab’ is applied to many foods. In Australia, it generally means refers to a doner kebab (usually called just ‘doner’ or ‘kebab’) Doner kebabs are made of meat cooked on a vertical rotisserie next to a vertical cooking element. The outer layer is sliced into thin shavings as it cooks. This style was invented in the 19th-century Ottoman Empire, and inspired similar dishes such as the Arab shawarma, the Mexican al pastor and the Greek gyros (which is also very popular in Australia). Kebabs vary quite a bit around the world, but surprisingly, the kebabs that are now popular in Japan are very similar to the Australian type – I was very happy with that when I lived there! 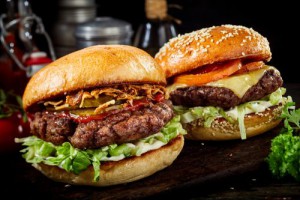 Hamburgers
Hamburgers are usually associated with the USA, but most countries have there own variants. The traditional Australian hamburgers are usually bought from fish and chip shops or milk bars and the meat is almost always ground beef, which we call “mince”. They commonly include tomato, lettuce, grilled onion and meat as minimum, and can also include cheese, beetroot, pineapple, a fried egg and bacon. If all these ingredients are included it is known in Australia as a “burger with the lot”. Most people also add barbecue or tomato sauce. Interestingly, McDonald’s used to serve a “McOz” Burger here, which included beetroot and tomato. 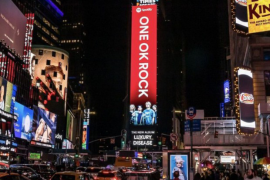